thanks for visiting this site

“I have over the years made several violins, violas and cellos. But through the demand for the harps I haven’t had enough time to make these instruments as much as I wished to. The dimensions and proportions of the violin ( and it’s mates as mentioned above ) are a long time fixed and apart from ornamental changes the rules have to be adhered to (unlike the harps where new ideas, woods and methods can be tried )

The instrument on view is a Guarneiri model made with 90  year old wood for the back, neck and sides. The soundboard or “ belly “ is spruce from an old ceiling beam from a mill in Slane County Meath and is 230 years old. It is a light instrument , has a warm sound and plenty of volume which will no doubt improve when played regularly . As I don’t play it myself I only get to hear it played occasionally by visiting musicians who really like it very much .  It would be a nice instrument for a professional player who is looking for something unique and special.”

about 28 years ago I made a 7/8 size cello and an Irish harp for two of the sisters.The trio , very young at the time , performed a farewell concert at the John Field rooms in the national concert hall.Piano, harp and cello.

As their father , Mr Fujita, was the Ambassador to Ireland at the time, but was re-posted elsewhere and we lost contact. the Three sisters obviously worked very hard at their music and are now full time musicians and reside in London.It’s nice to know the cello still is in good order in Japan , no doubt out-grown… I was sent this picture by email a while back. 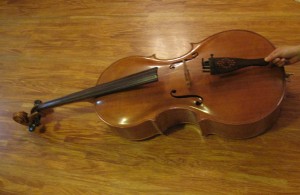